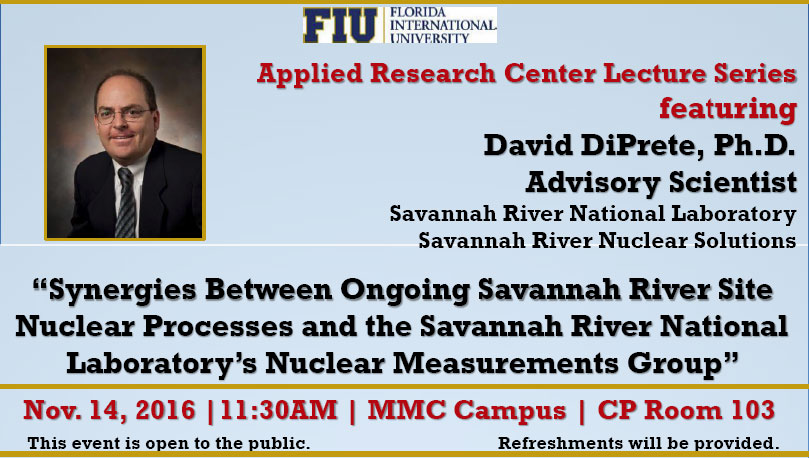 The Savannah River National Laboratory’s Nuclear Measurements Group provides both radiochemical analyses and non-destructive assay of nuclear material to the Savannah River Site. The radioanalytical capability of the group serves to complement the more-limited services provided by the Savannah River Site production analytical laboratories as well as offsite commercial laboratories. The amounts of radioactivity in sample matrices vary widely, ranging from environmental levels to those with doses high enough to require remote handling and manipulation.

An overview of past and present nuclear processes at SRS will be discussed, followed by explanations of how the Nuclear Measurements Group services are currently intertwined with these operations.

In addition to developing and directing radiochemical analyses and nuclear counting capabilities, Dr. DiPrete serves as a primary nuclear and radiochemical technical resource for numerous Site organizations. Dr. DiPrete was appointed Adjunct Professor for the Department of Environmental Engineering at Clemson University in 2003, and has served as the SRS Site Advisor for numerous Clemson graduate students. Dr. DiPrete has authored or co-authored more than 75 publications in the public domain, and over 75 papers presented at professional meetings in his area of expertise. He has been awarded numerous patents for his innovative nuclear measurement systems.

This event is open to the public.

FIU-ARC is committed to seeking out and spreading powerful ideas through various speaking events where distinguished speaker share their research.

All the events are open to the public. For more information contact:
Gloria Dingeldein
305-348-1606
dingelde@fiu.edu