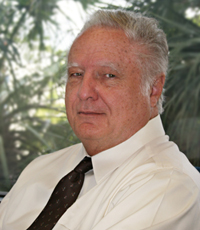 Dr. John R. Proni was named Executive Director of the FIU Applied Research Center (ARC) in January 2009. Dr. Proni is a former director of the Ocean Chemistry Division at Atlantic Oceanographic and Meteorological Laboratory (AOML), a research facility of the National Oceanic and Atmospheric Administration (NOAA).

Dr. Proni joined NOAA in 1972. During his tenure, he also served as director of the Ocean Acoustics Division and principal investigator, conducting research in energy production, satellite observations of oceanic features and the use of acoustics in pollution studies.

In addition, he has served on the External Advisory Board to ARC for more than five years. A scientific advisor to several federal and non-federal agencies, Dr. Proni serves as the scientific representative to the NOAA committee on ocean energy.

Dr. Proni earned his Ph.D. in physics at North Carolina State University and holds a master’s and bachelor’s degree from the University of Miami.